How to Add Logic to your Survey Template

As an Admin creating a survey, you can build survey logic into your survey template.

This article covers how to add survey logic into the survey template.

Click here for instructions on how to add logic directly into your survey, as in the below screenshot:

What is Survey Logic?

What is Survey Logic?

Survey Logic allows you to specify who should see a particular survey question in the following ways:

1.  You can trigger a follow up question to appear depending on how the survey taker responded to the preceding question. (We refer to this as a response rule).

2. You can specify that a question should only be presented to a specific subset of your population. (we refer to this as a demographic rule).

When creating survey logic, you must create the questions you will use before adding response or demographic rules.

You have the option to add survey logic directly into your Survey template. When you create or edit a question, you will see the option  to "Add a Demographic Rule" and to "Add a Response Rule".  Demographic Rules allow you to limit a survey question to a particular demographic;  Response Rules allow you to show a survey question only if the survey taker has responded to the preceding question a certain way.

How to Add a Demographic Rule: 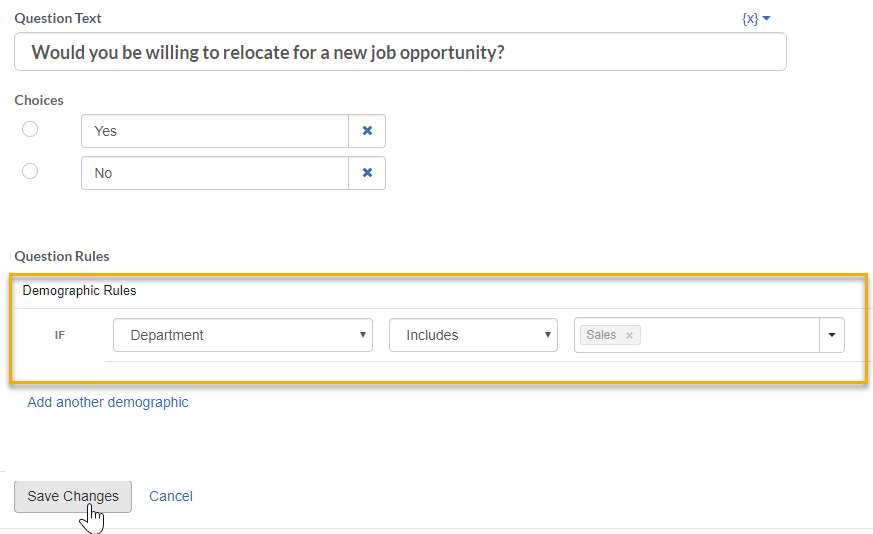 You can choose whether the question should be asked to this group only or to everyone EXCEPT for this group by changing the second drop down from "Includes" to "Excludes".

4. Add another demographic rule if needed.

Once you click Save Changes, you'll see a box appear under the question to confirm that you've added a question rule:

How to Add a Response Rule:

You will add a response rule to the question that immediately precedes the follow up question.

From within the question, complete the following steps:

2. Using the drop down menus, specify which response (or responses) on this question should trigger a follow up question. In the example shown above, the follow up question will appear if a survey taker answers "Yes" to the question "Would you be willing to relocate for a new job opportunity?"

3. In the drop down menu under Outcome, select which question should show if the survey taker responds in this manner.

4. If you want to add a second follow up question to survey takers who responded in this way, click Ask another question.

Once you click Save Changes, you'll see an updated number of rules associated with this question.