Your Templates in Feedback and 1-on-1s 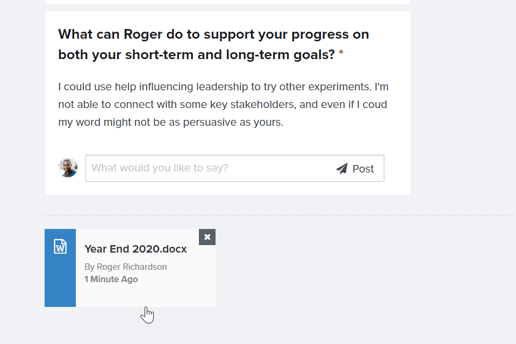 Employees and managers have always had the ability to add attachments to their 1-on-1s so that they can reference files together as part of their 1-on-1 conversation. Any manager in the upline of the employees who have the 1-on-1 are able to view all attachments included in the 1-on-1. Previously, any additional users who were subsequently given visibility into a 1-on-1 did not have the ability to view attachments. We have corrected this functionality so that now anyone who has visibility into a 1-on-1 will be able to view all attachments associated with that 1-on-1.

Draft Goals Visible only to Goal Owners and Upline

When employees create goals in Quantum Workplace, they have the option to save their goal as a draft before officially launching it in Quantum Workplace, which gives employees a chance to fine tune the goal either with their manager or on their own before making it visible to other colleagues. Previously, when an employee created a goal, anyone who was listed as a contributor for the goal would be able to see the goal in its draft state. Similarly, when managers drafted team goals, anyone who was added to the team goal would be able to see that draft goal. Going forward, draft goals will only be visible to the goal owner, their upline, and Admin users. Goal contributors will not be able to see the goal until it has been officially created.